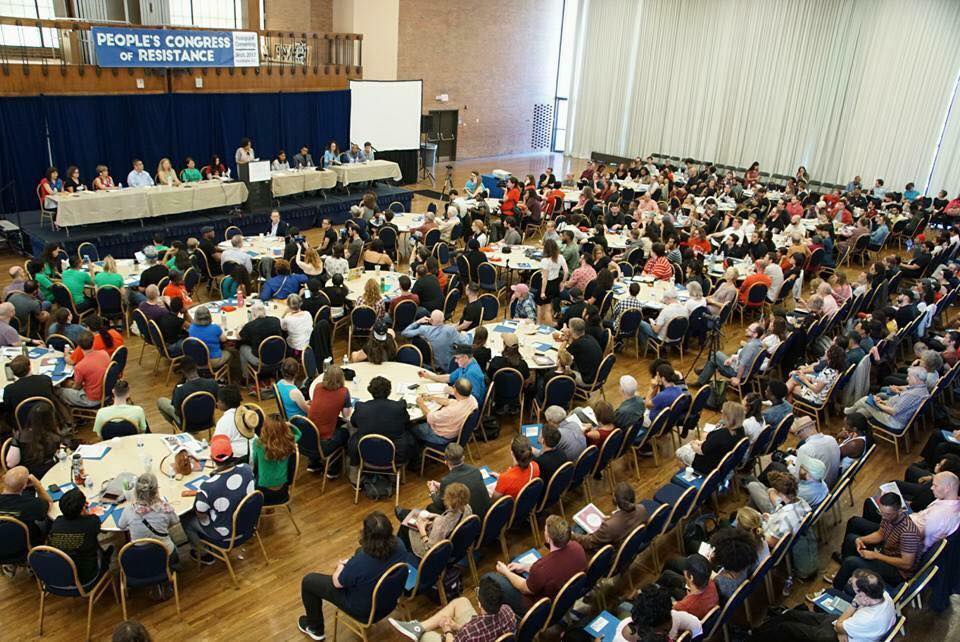 On Sept. 16-17, the People’s Congress of Resistance movement was inaugurated with a mass convening of grassroots organizers and frontline resistors at Howard University. All told, 727 delegates from 38 states and 160 towns and cities came to Washington, D.C., to discuss the People’s Congress of Resistance manifesto “Society for the Many: A Vision for Revolution,” to share organizing experiences to take back home, to express solidarity with each other and to resolve on common projects and actions for the future.

The People’s Congress was opened by housing organizer Yasmina Mrabet of ONE DC and Los Angeles teacher Peta Lindsay, a former Howard University student leader, who welcomed the attendees. Lindsay explained that the school itself derived from the Black community’s struggle for education in the Reconstruction period, and generation after generation, 150 years later, has continued to produce freedom fighters. Two high school student organizers from California, one a DACA recipient, announced that they were unbowed by the Trump administration, and had come to Washington to deepen their commitment to the movement and make links with activists nationwide.

Watch the opening salute to the guests here:

In the following keynote plenary Dominic Moulden of ONE DC showed the stark contrast between the People’s Congress of Resistance and the D.C. Council and U.S. Congress, which include no poor and working people. Karina Garcia of the Justice Center en El Barrio explained the special role of the Manifesto as a unifying document across the social movements. Brian Becker, National Director of the ANSWER Coalition, outlined how the Democratic Party is able to co-opt and redirect every progressive movement from below unless it articulates a clear revolutionary vision, an unambiguous definition of political, social and economic revolution.

The People’s Congress then split into workshops on “resistance tactics” — the development of a new media hub, collective defense of immigrant communities, the building of radical community centers as movement infrastructure, various techniques of mutual aid, as well as a workshop on how to integrate revolutionary politics into grassroots community organizing. Specialized discussions on mass incarceration and the political prisoners still behind bars took place, as did a session on rural and small-town organizing.

The afternoon and evening sessions “Solidarity at Home and Abroad” brought the crowd to their feet repeatedly, as leaders from the women’s rights, LGBTQ, immigrant, and Black and Brown freedom movements spoke forcefully on the need for steadfast resistance that can persevere and grow over the long term. After the family members of police brutality victims took the stage to share their stories, having come together from cities nationwide, the hall passed its first resolution to give them — and other families nationwide — complete support in their campaigns for justice.

The Congress also heard from special guest Jang Jinsook, the Director of Policy and Planning for the New People's Party in South Korea, a new progressive party currently in formation that aims to complete the “candlelight revolution” of last year that deposed the former president. Jinsook appealed for solidarity for the Korean people’s efforts to peacefully reunify the country and called on people in the United States to help stop Trump’s militaristic threats against the North.

Carlos Ron, the top Venezuelan diplomat to the United States, thanked the Congress for its solidarity with the Bolivarian Revolution and expressed that “this is the first time I felt hope in Washington.”

Sunday’s workshops delved deeper into the tactics and strategic perspectives of the single-payer health care, debt resistance and anti-gentrification movements, while another focused on how individuals and groups could effectively teach and discuss the People’s Congress Manifesto when they returned home. Another workshop led with the history of U.S.-Korea relations as a primer for those interested in organizing “No New Korean War” actions in the weeks ahead. (Just two days later, Trump threatened to “totally destroy” North Korea while speaking at the United Nations.)

In the final session of the two-day event, the Congress heard action-oriented resolutions from the floor. These included resolutions to end the war on Black America; for the independence of Puerto Rico and in support of a Sept. 19 rally at the UN; against the coup government in Brazil; and to free the political prisoners, including Leonard Peltier, Ana Belen Montes, Mutulu Shakur and others.

Other resolutions expressed solidarity with ongoing campaigns to help Filipino domestic workers break free from labor trafficking; for justice for Keenan King and Anthony Holmes-Garriques, killed by a racist vigilante in Long Island; for George Washington University's divestment from companies that profit off of Israeli occupation; for the divestment of cities, churches and pension funds and from the war machine; against the displacement of Brookland Manor residents in Washington, D.C.; against racist rezoning proposals in New York City; endorsing the upcoming "War and the Environment" conference; supporting the anti-war actions to protest 16 years of war on Afghanistan; against the blockade of Cuba and in support of grassroots hurricane relief to Cuba; and in unity with the ongoing Week of Action in solidarity with the Philippines against martial law.

Grassroots activists also received support for resolutions in support of those campaigning in Washington State for Safe Consumption Spaces to deal with the opioid epidemic; for the Native people fighting the nuclear waste storage project in Yucca Mountain in Nevada; for the Rochester community groups fighting for a police review board with genuine subpoena, hiring and firing powers; and for the Massachusetts organizers struggling to secure clean water at Norfolk Prison.

All actions endorsed by the People’s Congress of Resistance will be amplified, supported and aired by its national social media platforms, and activists in different cities are encouraged to hold simultaneous solidarity events to strengthen the bonds of this growing network.

The People’s Congress of Resistance convening organizations committed to 1) a mass popular education campaign to spread the Manifesto; 2) developing a People’s Congress of Resistance media hub drawing on the exciting and dynamic media-making already underway; 3) holding report meetings from the inaugural event that could be the launching pad for continued local and regional events; 4) a process for other groups to be added to the Conveners Committee; and 5) the publication of the resolutions, photos and videos of the inaugural event.

Afterwards, attendees marched in powerful and militant display of unity to the White House under the slogan “Stand against imperialism — Down with the warfare state!” Focusing on the connection of the wars abroad with the “war at home,” speakers especially declared opposition to a new destructive war against Korea, and any new regime change efforts against Venezuela.

Working-class organizers fundraised all summer to come from states in every region of the country. Many of the attendees had traveled great distances in caravans that originated in southern Florida, Texas, and Chicago. Despite the physical fatigue of travel, long days, little sleep and then a march of several miles to the White House, many expressed feelings of exhilaration to be surrounded by so many people who feel the same passion for justice as they do, who are dealing with common challenges in their organizing work, and who are dedicated to the fight for a new world.

The inaugural People’s Congress of Resistance was a huge success — and we’re ready to go back home and organize!