Videos and presentations of the Dec. 3 People's Congress of Resistance Organizing Webinar

On Dec. 3, the People's Congress of Resistance held its first national organizing webinar!

2. Spreading the People’s Congress of Resistance manifesto “Society for the Many: A Vision for Revolution”. This was one of the most popular workshops at the inaugural event, and in the months since many cities have organized study groups and meetings around the manifesto. On the webinar Nathalie Hrizi, San Francisco area educator, shared these experiences to provide local activists and organizers with further tools to spread the message of the manifesto in their area!

Download a PDF the manifesto here or order printed copies with the button below!

3. The crucial battle to defend Net Neutrality: the stakes for all of us and what we can do. Presentation by Margaret Flowers, Popular Resistance

4. Threat of war grows: Confronting the White House and Pentagon in its drive for a renewed war against Korea. One of the first actions taken by the People’s Congress of Resistance following the inaugural event was to march on the White House to demand no new wars against Korea, in the Middle East or elsewhere, and that all U.S. forces be withdrawn from the many countries where the U.S. is now at war. Trump and his generals have continued to ramp up threats including military exercises off the coast of Korea, while threatening to “totally destroy North Korea” with nuclear weapons . On the webinar we heard updates on the war danger and from anti-war activist John Prysner who recently traveled to Korea and has been organizing protests in Los Angeles.

We also heard from anti-war organizer Joyce Chediac, who recently returned from the Middle East, and discussed the U.S.-Saudi efforts to instigate a wider regional war. To see a list of emergency protests in defense of Palestine, visit the ANSWER Coalition website (list in formation)

Because of technical difficulties with the audio, we are copying below a section of the presentation dealing with the severe crisis in Yemen

With the Syria war winding down, there is more focus in the establishment media on the war in Yemen. Saudi Arabia and the  gulf states, all US clients, have been attacking and blockading Yemen, the poorest country in the Arab world, for 2 ½ years.  More than 10,000 are dead mostly from indiscriminate bombardments; 130 children a day are dying from disease and hunger related to the bombing and blockade. There is mass hunger.  The country is experiencing worst cholera epidemic ever recorded.

Media here portrays it as a regional conflict between Saudi Arabia and Iran, between Sunnis and Shias, as if this is endemic to the Middle East. This is not true.

Many Yeminis, including Sunnis, have supported the Houthis, who are Shia.

What is hidden by the media is that this is a US Saudi war.  The US is directly involved, sometimes on a daily basis, as it refuels the Saudi-operated planes dropping the bombs so they don’t have to return to Saudi airfields and can morequickly return to bomb Yemen.

The US provides the intelligence for the targets. And all the weapons.  And earlier this year, when visiting Riyadh, Donald Trump announced the single largest weapons deal in Washington history, some $350 billion in weapons to Saudi Arabia over 10 years. 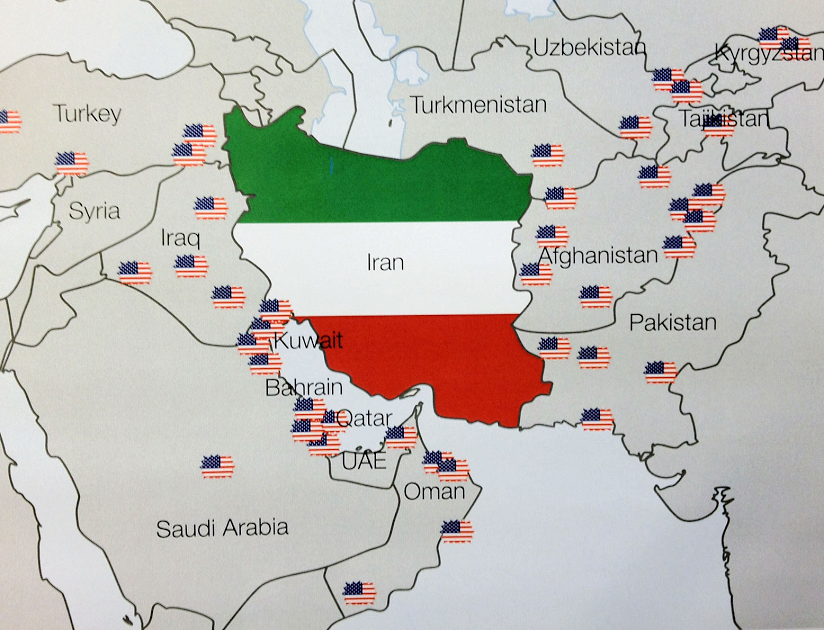 This makes this a US-Saudi war, with Washington complicit in every war crime being committed there. It is part of a US aggression against the whole region, and most pointedly now, against Iran, as the Saudis say their primary effort is to push back Iranian influence.

But clearly the first casualty is the people and sovereignty of Yemen. It is crucial to expose this US role, and to demand that the US tax money spent on bombs to drop on Yemeni children be used instead to build schools and hospitals and provide jobs at home.

Trump claims Iran is a threat, but this country has no military bases outside its borders.  The Pentagon, however has bases surrounding Iran. (See map)

Under present conditions in the Mideast, we must be on alert. The militarists suffered a setback in Syria, but they can be very aggressive after a defeat.  There is a possibility of more  Israeli bombings of Syria and Lebanon, of the announcement of an open alliance between Israel and Saudi Arabia which would go against the will of all the Arab people, and be especially aimed at the Palestinian people, and of other predatory measures.